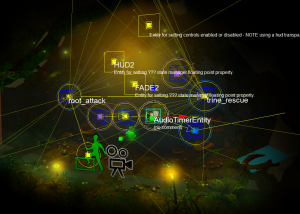 Ever wonder about the lights in Trine? Or maybe about camera angles and such? Well we do, a lot. Illuminating a scene in the proper way is one of the most important tasks in terms of finalizing a look of a level. Whether it be an eerie, murky swamp or a tropical island at sunset, right type of lights make or brake the atmosphere.

Camera areas are important in giving the players just the right size screen to look at, so that everything is clearly visible. Action comes in when talking about different scripts for objects, enemies and such to know when to act.

In this blog post there are two different shots from our game engine, both scattered with light objects. The one on top is Amadeus surrounded by different colored lights and a really big one coming from the right, represented with two actual objects right next to each other.

The picture below has about the same amount of lights as the one above, but they are hidden away in another layer. Instead what you see here is a camera area that tells the screen to zoom out when the player reaches it. That is also when the action component kicks in, all of those yellow lines you see are pointing at the plant root enemies that bust out through the dirt to try n’ get at our chivalrous knight.

These are just a portion of the components that finalize the look and feel that we are going for in Trine 2. Other things like actually making a single level, setting each mushroom in at a time, that takes a lot of time and careful placing. More on that later.

Edit: Unfortunately the pictures seem to have been lost over the years. 🙁 The small above picture was the only thing we could salvage. Sorry about this! -Riikka