Or almost. We got pictures and made this interview with a lovely couple Sean and Angela a while back. It’s was their first time cosplaying and together they made an Amadeus outfit for Sean. See it yourself and read more about the making of the costume from below! 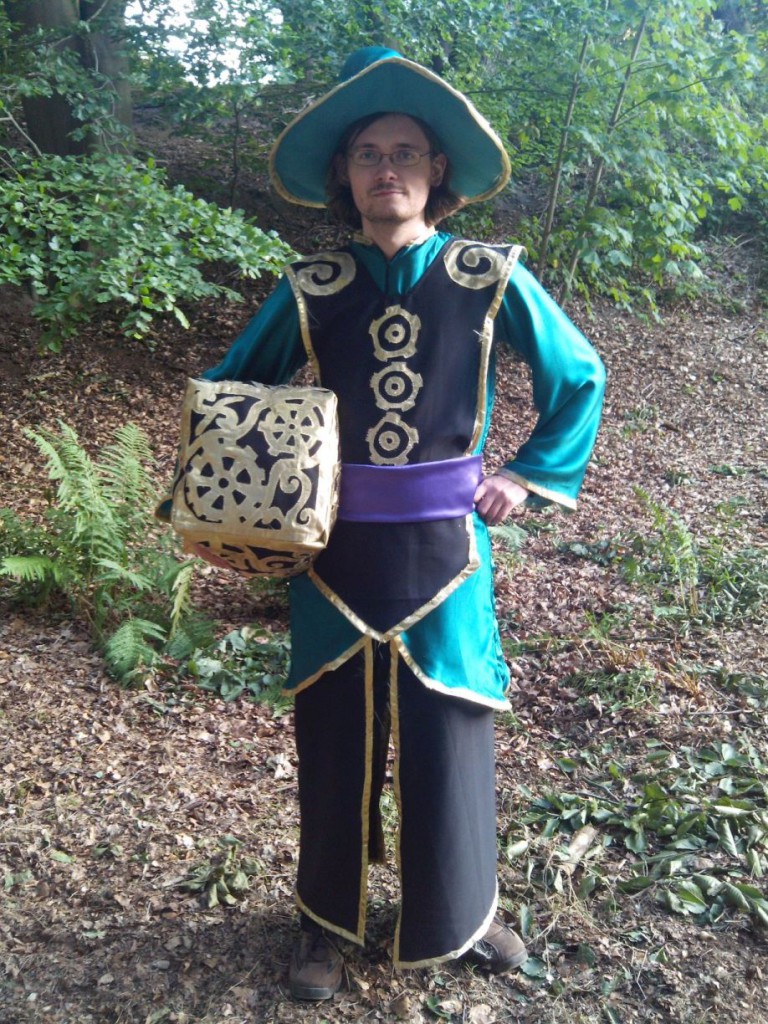 Here is the cosplay!

– Could you tell us a bit about yourselves and what you do?

Sean: We are both students at the end of our studies. I’m studying to become a mechanical engineer and Angela a dental hygienist. We’re both in our 20’s and interested in gaming. We’ve been together in a relationship for almost two years.

– What made you decide to cosplay Amadeus?

Sean: It was a bit spontaneous, but it was partially due to the fact that I happened to be playing a D&D character at the time who was, in characteristics and abilities, accidentally quite similar to Amadeus. I reckoned I might as well go the full mile when the question of cosplaying something came up when me and Angela decided to go to Castlefest, which is a Dutch medieval/fantasy festival.

Angela: I was just there helping to make the costume and props become a reality.

– Could you tell a bit about the process of making the costume? Like how much time did it take, what materials you used, etc? How did you split the work on the costume between the two of you?

Sean: Angela did most of the work, and there was actually not enough time. I didn’t really have the skills to do anything complicated, but I did what I could. Angela in particular had some long sleepless nights, which was pretty horrible work to get everything done on time. All in all, we really just needed more time. It turned out really nice in the end, but I do regret putting her through all that.

As for the research, we discovered that Amadeus’ appearance was actually quite inconsistent between games and various pieces of official artwork. In the end we just went with a mix between Trine 2 and 3 Amadeus, combined with some of our own liberties. At the time of making the costume Trine 3 wasn’t released yet, so we had to work with screenshots from a trailer.

The fabrics themselves were a bit difficult to get, especially the greenish blue, because we were trying to figure out what a fictional fabric was actually supposed to be in real life. I’d say we succeeded quite well, although the fabrics we picked proved to be very difficult to work with. The greenish blue fabric was particularly nice, since it actually changes from green to blue depending on the light; exactly like it does in the game.

Angela: As Sean said I did most of the work. I often went to bed at 3 am (occasionally 7 am) and got up at 10 am to continue working. It was horrible… We even had to continue for 7 hours in the morning on the day of the event itself to finish everything. Needless to say at the event itself I was beyond tired.

I recommend anyone who wants to make a costume to start months before you actually need it and not a week and a half like I did. At one point Sean was helping me with removing the loose threads from the golden pattern on the box that I sewed and he fell asleep hugging my feet.

The fabrics were hard to work with because they were either too thin, too stretchy or it jammed my sewing machine. The fabric looked right but I hadn’t had much experience with fabrics before, except for fleece, so I had picked the wrong kind of fabric, but at least the colors looked right.

We made the brim of the hat out of cereal boxes taped and glued together because the fabric wasn’t thick or stiff enough to stand on its own. On the pointy bit of the hat I partly filled it up with stuffing wool and had hand sewn a bendable wire along the length. 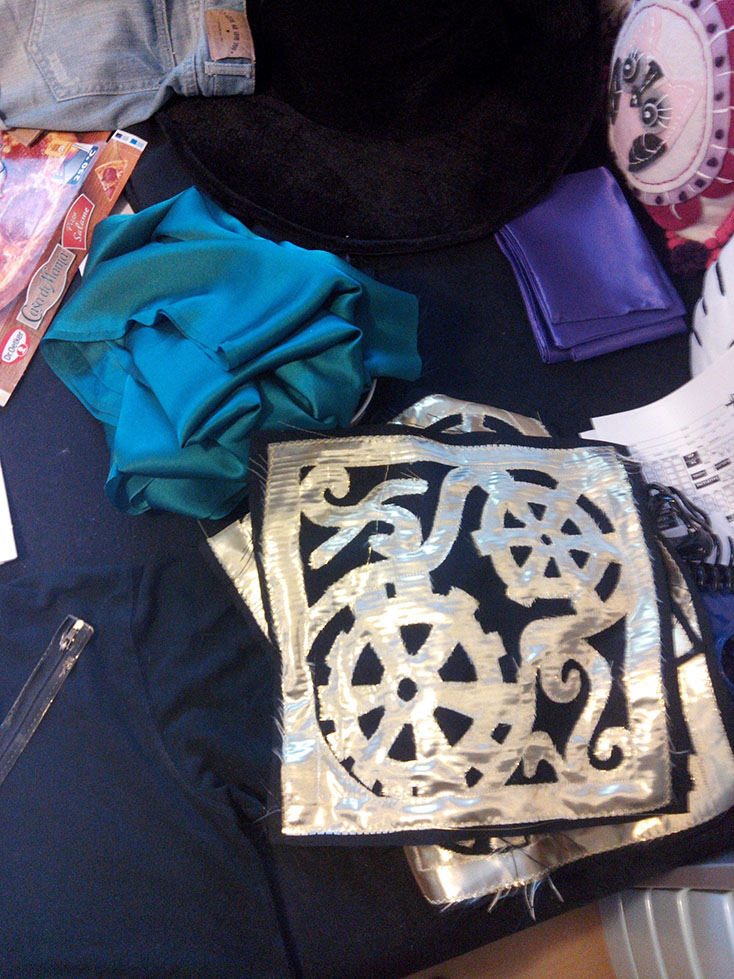 – How did you first find out about the Trine series?

Sean: I first saw it at a friend’s house. I’m not sure how I got into it myself after that though. I either tried looking it up on Steam someday to see if it was available, or I decided to look it up because I saw a video about it on YouTube and remembered it existed (I saw it at my friend’s house several years earlier, so it had been quite a while). The video served to show me how interesting the gameplay was, and how pretty it looked, so I went out to buy it.

Angela: I remember that some time ago I saw a video of the gameplay and thought it interesting but didn’t really went to research it and forgot about it existing. Later on I met my boyfriend and he showed me the same video while recommending Steam. I had made a Steam account and before I could do anything Sean gifted me Trine 1 and 2. I had a lot of funny moments playing them.

– Any tips for anyone thinking about trying cosplay for the first time?

Sean: Keep it simple. Many costumes need more than just fabric, but you can afford to leave many of the details out, especially in the case of Amadeus, who is usually seen at a distance or with an inconsistent appearance. We just stuck to the stuff that made him distinct. Creating a 100% likeness is very difficult for your first try, so don’t bother, unless you go for something that is already simple. Fantasy outfits are not restricted by physics or a budget.

Angela: Same as Sean says. I would also advice to start far ahead of time with making the costume and/or parts so you can calmly think about solutions or order materials if you come across a problem. If you can, visit a fabric store or order samples before ordering the real fabric. This is so that you can get a feel of the fabric, imagine how it might react to the sewing stitches, will it fray after being cut, etc. We had ordered everything online and found out too late that the fabric was far from ideal to work with. 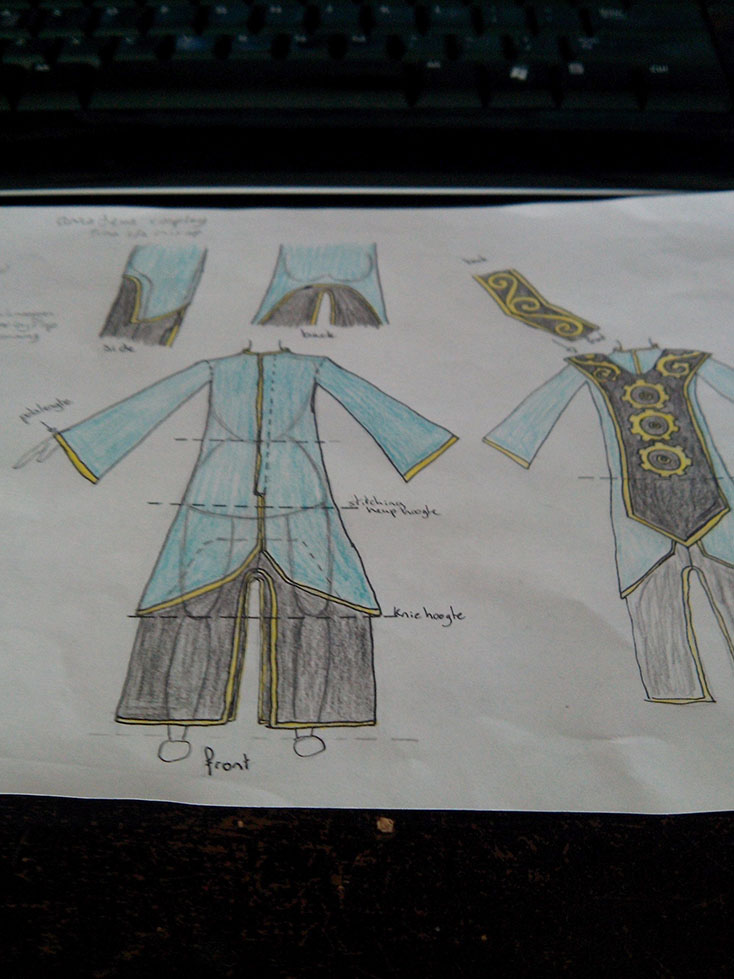 Draft for the Amadeus cosplay.

– When dressed as Amadeus, did anyone recognize you, or perhaps mistake you for some other character?

Sean: It may have been a fair few people, but only three people actually spoke of it. That said, Amadeus is quite a rare person to cosplay as, so I’m sure I stood out from the crowd. The box is what gave it away. The wizard outfit itself was something most people didn’t look at as closely as we did in-game, so it wasn’t as recognizable by itself. Funnily enough, it did seem very child-friendly, as it attracted the attention of children quite a lot. Must be the colours.

Sean: I suppose the costume could still be improved with more details. All we’ve used at the moment is fabric, while the ‘real’ one has a fair bit of leather and metal as well. It would be impractical to use a lot of brass though. Too heavy. Overall it’s just a matter of tidying things up, or adding stuff on. There’s no rush.

Angela: The Amadeus costume could indeed be improved a lot. I would say, even to the point of redoing it entirely. I would prefer to at least redo all the gold fabric, it is just the wrong fabric and the stitches doesn’t stop the fraying. The costume also turned out quite itchy around the neck from the stitching, solving that would also be a good thing. But if anything, it is that there won’t be any more rushing done in making a costume.

Me and Sean have been toying with the idea that while he cosplays Amadeus I should cosplay as Margaret armed with either a broom or a chair.

So there we have it folks. Special thanks for this of course go to Sean and Angela.

We previously had an interview with Jina D who was cosplaying Zoya. Now we are only missing Pontius, anyone up to the challenge? ? Feel free to send us any pictures from your Frozenbyte character cosplays to [email protected]!

Great weekend to all!

2 comments on “A Real Amadeus!”