Nine Parchments – The Journey So Far

This is a story about the development of Nine Parchments, a multiplayer video game about young wizard students collecting spells and sometimes blowing themselves up accidentally while learning them.

For your amusement, this story is illustrated with images and outtakes from across the development period.

In the autumn of 2015, Frozenbyte published the third installment of the Trine series. Trine 3: The Artefacts of Power was an ambitious project, which near broke our hearts as we were forced to release a game with only a partly finished story.

As we labored in the smoldering ruins of our dreams, our CEO and Nine Parchments Game Director had no time to waste, planning how to best move forward next. And so the earliest designs and groundwork for Nine Parchments were already laid in as early as October 2015 – over two years ago.

Amadeus the Wizard’s beach tutorial level from Trine 3, which itself was inherited from the beginning of the Searock Castle level of Trine 2, served as Nine Parchments’ foundation in the early days: the game was going to be about wizards and spells, just like Amadeus. And the first levels were based on Amadeus’s holiday retreat adventure – but this time with more monsters.

The earliest production team was only a few people, who worked with a model of Amadeus, giving him an arsenal of combat spells.

The work on our main characters was mostly done in 2016 and early 2017. After completing their work Shadwen, which was released in May 2016, the art team joined Nine Parchments and started creating content, and the first thing of course was that we needed new and fresh protagonists to discover our missing parchments.

To have adventures, you need some adventurers. Since the very beginning, it was clear that we would have an all-wizard adventure. Since the game was about collecting magical spells, it would have been very sad for some rogues and warriors to join up and never get any presents.

All the new characters were to be students of the Astral Academy (a prestigious school, and recently often invaded institution of the Trine world).

Whee! We made it to Nine Parchments! From left to right: Nim the Cleaner, Marvek the Torrid, The Mechanical Owl, Gislan of Alcyon, Cornelius Crownsteed, Carabel the Glacial, Rudolfus the Strange, and Amadeus the Wizard

To hinder our mighty apprentices in their somewhat dubious quest to bypass a few years’ worth of Proper Education, the landscapes have been filled with strange and hostile creatures.

The Chimera of Rage defies the laws of physics and logic

In early development, our students were so terrible at fighting, the Guardbeasts had to facepalm with their shields a lot

Eventually, things got better, and by now the monsters practically worship Cornelius

The Arrival of Levels

Our early designs for the game involved very short and simple runthroughs of the game, which were to be focused around the spells, but soon we decided to add much more length to the game with new levels and challenges.

One of our biggest challenges in Nine Parchments production was the hiring and then training of new level designers and level artists to build and illustrate the levels these student characters and terrible monsters were to populate. For many of these designers and artists, Nine Parchments has been their first game project, which you can hardly believe as you look at the incomprehensibly beautiful vistas they have created. 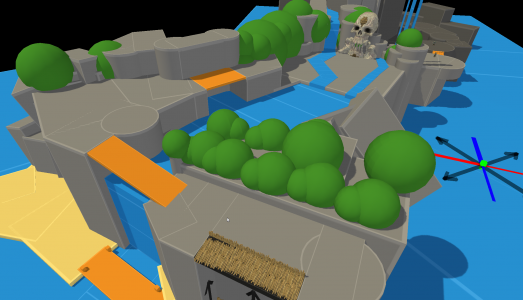 A level starts with geometry 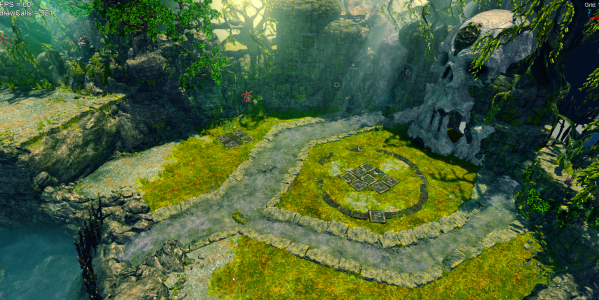 After the geometry is laid out, art is added.

Can you find the final version of this level in the game? 🙂

Even though the game was playable already in GamesCom in 2016, and was sort-of completed by spring of 2017, we still felt something was missing. This led to the addition of unique skill trees to all of our eight characters, and giving all the staves in the game statistics, uplifting them from melee weapons to powerful wizard artifacts.

To make this happen, we received help with these skill trees and staves from the Has-Been Heroes designers who had just completed their work on HBH, and who had gained great experience in creating abilities and balancing skills during that time.

As we implemented all new content and features, we had over two hundred people visit our offices, helping us focus test our game, including people from another Helsinki-based video game company! Thanks to their feedback, the Blink (which started as one of the spells to be found in the lost parchments) made its way to a basic ability which all characters in the game have as soon as you start the game.

We also concentrated on polishing the game and expanded it to work on four platforms, while trying to make sure no one has experiences like our QA department… 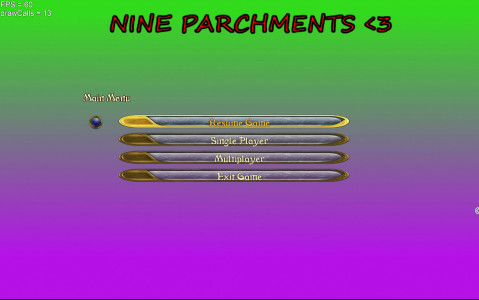 Not quite ready for release yet 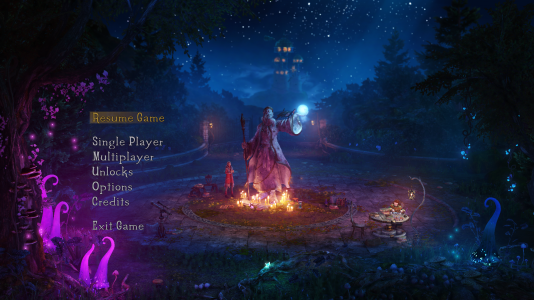 You can see minor improvements maybe, if you have The Eye for it

Difficulty levels were also added into the game at a fairly late stage, which led to all the combat scenes having to be rebuilt over and over again. In the final game, there are enemy encounters that may have been changed dozens or even hundreds of time during game development! 😀

But everything started to finally come together, and little by little, it was time to start letting go of creating new content and start trying to get these wizarding students and their spells out through the door.

The End is Nigh

As 2017 is coming to its end, Nine Parchments is working its way through console submissions, craving to be Out There soon. The pressure is now on our programmers and QA as they test and fix issues like online coop, preventing unexpected crashes, and making sure everything rolls smoothly on all four of our platforms.

It is quite like a very tough boss fight that these clever people are now soldiering through.

Along the year and towards the end we’ve also put effort towards our marketing, as with this piece:

A Strange and Magical Journey

In the time it took to develop Nine Parchments, Frozenbyte has both changed and remained the same as a company. The rough times of two years ago pushed us into new and unexpected directions. Our VP is finally going on a holiday. We also parted ways with some old friends, but also gained a lot of new ones: our writing and audio departments have gone through changes, and so have our art team, our design team, our code team, HR team, QA, and the ever-beloved catering staff who make sure we eat something besides Friday candy.

Our focus on being a passionate and independent game development company hasn’t changed at all.

Through these past years, we’ve often been asked about the game that put us on this path to the Nine Parchments: what about Trine? How does the quest for the three heroes continue? Unfortunately we don’t have these answers to you yet, but you can assume that since Amadeus himself appears in Nine Parchments, that at least someone made it alive through the trouble of collecting Trine’s missing shards.

As for what will happen with Amadeus and Frozenbyte in the future, that’s something we’re all eagerly waiting to find out, once Nine Parchments is out at last! 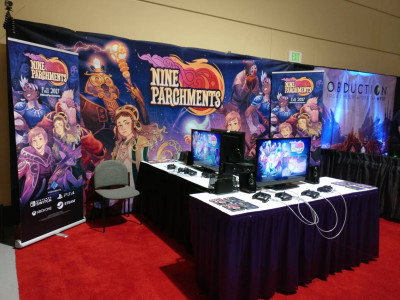 We also had the opportunity to take Nine Parchments on tour many times! Here we are at Pax West 2017

If you have any questions to us Frozenbyte people, about Nine Parchments or anything else that tickles your mind, we are doing an AMA (Ask Me Anything) in Reddit later tonight on /r/nintendoswitch to celebrate the game’s first platforms launching tomorrow on the Tuesday the 5th of December.

We are ever so thankful to all the people who have followed the progress of this game’s development ever since it was first announced. Thank you to all our wonderful focus testers, over 200 people who came to our office to try the game and give us feedback; thank you all the uncounted masses of people who tried it during game conventions and events; and thank you everyone who sent us questions and comments on it on social media platforms and websites and helped keep us going and achieve our goals.

We hope you, our beloved audience, will be pleased with Nine Parchments once it’s out and have a lot of fun with it with your friends and family and those complete strangers you might run into when cooping through.

Right now all our team members are slowly moving on into new projects, and we hope you’ll stick around to see what we’ll be working on next 🙂 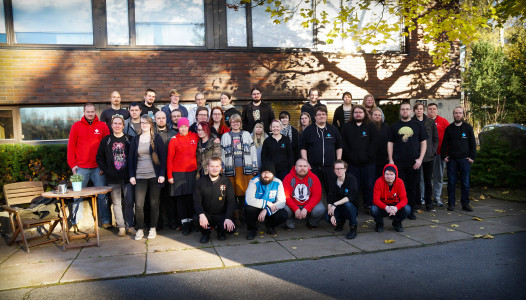 14 comments on “Nine Parchments – The Journey So Far”